Music Man Guitars for Sale or Trade: NO COMMENTS PLEASE!

FOR SALE OR TRADE

Please understand that Ernie Ball is the only guitar manufacturer to provide a “For Sale Or Trade” service. This service is also free of charge. It is expected that the rules are strictly adhered to by all posters who use this privilege.

The rules, set out below, have evolved over time at the collective request of fellow Forum members in an attempt to overcome issues that have arisen from time to time.

*Sellers, Buyers and Traders are to take full responsibility for their transactions. EB will not accept liability.
*Disputes will not be mediated nor resolved by EB or Moderators.

1) Before posting an advert you will need a posting history of at least 25 previous posts throughout the Forum over a period of at least one month. Most importantly, you must be a contributing member of good standing in the forum community. In borderline cases, Moderators will review your posting history and will remove your advert if they deem necessary. 'Serial posting' in an attempt to obtain 25 posts in a short time period of time is not allowed.

2) Only EB/MM items may be advertised.

3) No advertising for a friend.

4) In the case of a sale, state the selling price.

5) Asking for payment by PayPal gift option is not allowed.

6) Do not link your post to an on-line auction (e.g. Ebay) or to any other media where you may have placed your advert.

7) No comments please. If you need to compliment, ask/answer questions, or negotiate then do so by private message.

8) Posts will expire after a month but you are at liberty to re-post your advert after that time if you wish.

9) Please delete posts when transactions have been finalized.

Note: Failure to observe any of the above rules will result in automatic deletion of your posts and, in some cases, the possibility of being either temporarily or permanently banned.

1992 Ernie Ball Music Man Eddie Van Halen Signature EVH Flame Maple Top, Trans Gold.
Finished 8/6/92.
I may be the 4th owner but can’t 100% confirm.
Recently looked over by a well trusted luthier in L.A.
Everything looks to be original with no mods or repairs.
Neck is straight and frets are in great shape.
Set up with EVH 9 gauge and plays great.
Few dings, dents and scratches but nothing sticks out.
OHSC shows wear but fully functional.
Case key, spring and backplate not pictured.
$7k

Ernie Ball Silo 1993 with Floyd Rose with original pickups and OHSC. Amazing condition for the 29 year old guitar. frets are in great shape and the guitar is in overall great shape. Looking to sell for 1300 euro or partially trade for a Sabre or Cutlass (I'll pay the difference)

I've got a 20th Anniversary Silhouette I'm looking to move to a new home. I’m asking $2000 free shipping in cont US. This is a hardtail with matching headstock. I bought this from Keith many many moons ago and - she's not gotten in any love in the last 4-5+ years. Used it live a couple of times with a few American Idol Artists shows i did - (Danny Gokey and Phil Stacey) but hasn't seen much playing time while in my possession. I'll post pictures when i get home... or DM me and we can talk private. See pics below

Still need to sell off a few of the girls from my stash to help offset some unexpected medical expenses. Figured I start here first before trying Reverb/Craigslist since you folks are already big fans of the brand and know something about them. If interested, hit me up and I can supply more photos.

Up for grabs is this hardtail 2009 Axis Super Sport HH in Black Cherry Burst with Rosewood fretboard on Maple neck. I would rate this guitar in excellent condition though it does have some minor blemishes/damage on the back of the guitar. Two lighter scratches, one on the back edge of the bottom bout and one on the back just below the belly cut and one smaller but deeper scratch just off the corner of the control cover plate, all blemishes by previous owner. Comes with the original EBMM case and case candy. Looking for $1500 plus shipping. 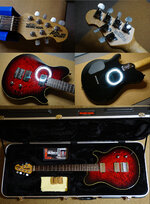 At the moment, I'm only interested in US sales and CONUS shipping. Thanks for looking.
Last edited: Jul 4, 2022
J

I'm pondering selling my Luke III Fuchsia and Sabre Pacific Blue Sparkle. These were both quarantine buys -- never gigged, basically mint/like new. I'm the only owner of both. Figured I'd ask here before going to TGP or Reverb.

More pics available, of course! I have 100% positive feedback on Reverb (Jeremy's Guitar Addiction Outlet Feedback -- Ebay as well, though I haven't sold their in awhile and also TGP)

Just giving this one a bump. Price reduced to £2000

Back up for sale: '99 Axis Super Sport MM90 with Piezo. Had this on hold for another forum member but the sale fell through.

Overall very good -to- excellent condition. Notable items are two small neck pocket finish cracks and some extremely light fret wear in the cowboy chords. Otherwise it's in great shape for a 23 year old guitar. Has aftermarket knobs, tuner buttons, and pickup covers, will come with all the originals.

First is a unique Axis in black with a pick guard and binding in black. Looking for $2250 shipped CONUS only.

The second is one of my favorite Axis Sports an HSS version in a gorgeous blue that has an aqua like appearance in person. $1650 shipped CONUS only.

These are in pretty amazing shape. PM me for more details and pics.

I have an amazing rep on Reverb. 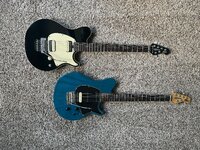 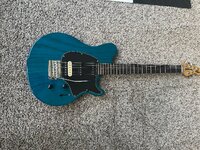 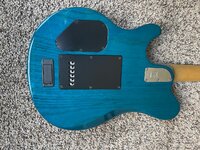