Hi all!
First post here, new owner of a Sterling Valentine, not the expensive MM Ernie Ball one.

Now, I've found that most people have small gripes against that the guitar hasn't got a single coil in the neck position, but frankly, wouldn't it be very easy to swap these out with each other? The single coil bridge pickup is in the exact dimensioned shell as the neck humbucker and I wonder if one could just swap places with these to have single coil in neck position? And HB in bridge position.

I wonder if there's anyone that has done this on their Sterling Valentines?

Also if it's possible to just turn on the bridge single coil to get a "reverse slant" staggered pole pieces, or if something seriously happens with phase reversal, or whenever in pararell/serial mode, or any "in between" setting when both pickups are used.

FWIW, I think it's the main trait of the Sterling Valentine. The high end one, it isn't needed, since you have split/tap hb in neck anyway.
Last edited: Mar 22, 2021
M

Seems that one has to get a pic here before someone replies. Here's the wear on the pickguard after having it for one week, 1-2 hrs a day playing, with a regular plastic/nylon pick...neither soft or hard...medium 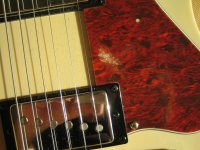 This was a first. Have had other guitars, both posh and budget, where this isn't showing up in 10 years time even.

I've gotta admit thought the neck was splittable on the sterling one. Shouldn't be a problem to rewire it and move the bridge pickup, but if it were me, I'd just buy a splittable pickup for the neck.
The stuff about phase reversal is beyond me I'm afraid, and the pick guard wear... new one on me too. Actually looks cool to me tho
J

If I were to hazard a guess about the pick guard, I'd say they used a cream or white pickguard, and just printed the tortoise shell pattern on it, or it's a very thin sticker, and you just wore the pattern.

There's a reason the Sterling line costs significantly less than the EBMM line, and it's not just because it's made in Indonesia. I have a couple of Sterling Axis, and it's readily apparent how they get to their price point. When I received my most recent Axis (the new flame maple neptune blue), the frets felt gritty, like sandpaper. On closer inspection, it was obvious that they had run a sanding beam over the frets to level them, but then didn't bother to polish further - you could see the tooling marks. Several hours with my set of fret erasers and a polish cloth and they're loads better (but not quite up to the quality of the stainless frets on my EBMM Axis).

That, and on both my my Sterling Axis, the tremolo - it's certainly serviceable, but the arm has way too much slop until it's almost completely screwed in. A little pipe tape fixed that somewhat. Also, the tuning machines leave much to be desired - I may swap them for a set of ratios.

All that said, the neck feels great, and the pickups are nice and hot. They didn't cut corners where it really mattered.
M

Thank you for reply. But I've encountered a lof other Indonesian/South Korean/south Asian guitars with pickguards, that after ten years (black ones) just shows a surface scratching without changing colors. You can only detect it when you hold it up against the light and see surface "pencil marks" so to speak. Never ever encountered a wear down to the bottom on any other pickguard after one week, regardless how shoddy Chinese copy I had.

This got me thinking actually, while I have to change out pickguard soon then, if it chews that much in one week, I've eroded my way down to the top body wood, within 1 year, I would rather turn to Ilitch hum cancelling systems and ask them to build one with their humcancelling system built in, since one can't buy any silent circuits from EBMM at all, as a 3rd party or optional electronic circuit to put into any guitar. So I get rid of the hum from the SC pickup... although it's around 11K I think it's solvable.
M

And now I've swapped them pickups. SC in neck and HB in bridge. They dropped in without hassle, and the sound is different of course. A fair number of resoldering and re-pulling of pickup cables was needed which is nothing to recommend if you don't are savvy with guitar electronics repair and handy with tools and soldering iron. This was more to my liking, the HB bridge pickup now has a hum free cranked, dist tone whenever amp is set to that (or stomp box), and the SC has a "stratty" neck tone, with still spanking treble tone. The Tele twang sound of the SC in bridge position had to go though.

One thing I discovered, is that the middle position of the switch doesn't sound any different from the neck pickup only. I e the switch in up position for neck SC pickup. On some amps it does, but on most modelling, modern ones, and multifx units it doesn't sound any different, and I don't know what that is. There's NOT a phase idiosyncrasy introduced just by swapping them out. Their orientation - physically - is the same.

Another slight anomaly I discovered, is that even when the boost function is off, the HB hums about the same as the SC - but this it did even when in neck position as it originally came with. So I wondered if the HB is really a HB pickup? I discovered when removing the battery (boost function still off) the pickups became totally dead, silent, which means you can't play them passively. Say, if a battery should drain, and go south in the middle of a tune, you can't turn off the boost and carry on playing.

The HB pickup starts to hum as fast as I put the battery back in, and the guitar isn't plugged in to any cranked, dirt, amp but a fairly clean signal. But this was so, even before I made the swap. The HB pickup has a slight hum that is not heard on other similar guitars with same pickup configurations.
M

TripHazard said:
I've gotta admit thought the neck was splittable on the sterling one. Shouldn't be a problem to rewire it and move the bridge pickup, but if it were me, I'd just buy a splittable pickup for the neck.
Click to expand...

There's two wires melded together with a shrink tubing inside, that just ends up in the air. It belongs to the HB pickup. Now I've changed the tone pot out to a push/pull one and soldered those two wires, and ...yes, now it's splittable, so I can choose SC bridge tones now, although not exactly Telecaster ballpark. I e it's sound is not the same as the dedicated SC pickup in bridge position. The reason I swapped is that the SC pickup has a slight weaker reading on the multimeter, so it actually is better in the neck position where the strings oscilllates more.

But pushing the boost pot at 12db + will remedy that. Alas, with added hum and noise too.

I e but if you kept the HB in neck, there's already a splittable possibilty built in, that just hangs in two wires inside. You just have to change a tone pot out to a push/push or pull/push and do the soldering. The difference in sound from the real EB model is that you'll get hum. The real EBMM has that added circuit with magnets and coils in it that reverses something and makes the SC's (all, splittable and the SC only pickup) silent.
Last edited: Oct 10, 2021
You must log in or register to reply here.
Share:
Facebook Twitter Reddit Pinterest Tumblr WhatsApp Email Share Link