Since it's a cold, December Saturday-- and raining (i.e. no motorcycling today) I decided to perform some overdue bass maintenance.

As I understand it, cobalt ranks higher on the hardness scale than stainless steel. According to the string packaging, cobalt is used for the outer ribbon and underwraps. So my tendency of overthinking engages; theoretically, a string constructed of material harder than that of the frets should wear the frets quicker than strings made of softer material.

Again, I'm probably overthinking the matter. A quick search of the forums didn't help matters... although it did get me thinking of installing a set of flats on my Bongo

My #2 'Ray is currently wearing Cobalts, but I'm thinking of trying a set of something else I have on hand. Since my #1 'Ray is wearing DR Blues, I'm never without a proper amount of zing 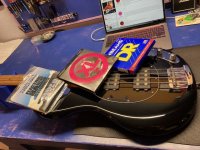 After removing the Cobalt Flats, I noticed a bit of wear on the frets. Whether or not it can be contributed to the Cobalts is anyone's guess. I've tried a few different sets on this bass:

- Stock Slinkies for a few months. Love them; even when they're old they just sound great to my ears.

- Cobalt Rounds for a few weeks. Hated them from the very start. Which was a bummer as I had high hopes and bought a few sets to have
replacements at the ready. Since I had invested a bit of money I tried to like them... but I couldn't have been happier snipping each in half.

- Cobalt Flats. Again invested in a few backup sets, and decided at the start that I would leave them on for at least 6-months. It's been quite a bit longer, but I didn't play them much in the last few months.

Spent an hour or so cleaning up the frets, and restrung the bass with the Group III's. Success! These sound great right out of the package. Spent the next few hours playing through the different pickup and EQ settings. Now of course, I've got to go online to find a few backup sets to keep on hand-- having learned my lesson from the two prior sets LOL!

Sure wish I tried these sooner! 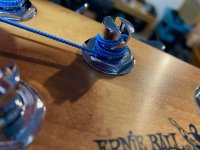 I like the Cobalt Flats but like the Group II and III flats more. They suit my tone a bit better.

You know that guy who played bass on "Peg" and all that? He's a friend of mine. One day, he was playing my basses and most of them back then had TI Flats. He picked up the one I had strung with Group II Flats and said, "Okay, those are a man's string."
You must log in or register to reply here.
Share:
Facebook Twitter Reddit Pinterest Tumblr WhatsApp Email Share Link