Finally it is here and it is just fantsatic! It is evan an improvement of the regular and also the Artisan series! Big thanks to EBMM for this great instrument which inspires my music. Thinking of an evening playing on this awsome instrument keeps me additionally motivated during day doing my job! Hope to be able to post new music with this instrument soon! 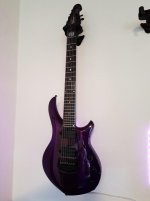 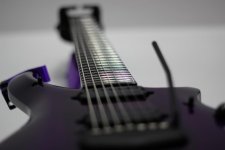 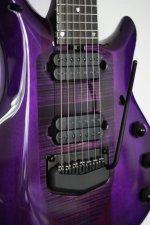 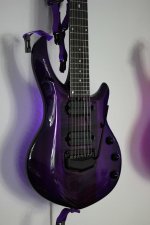 Congratulations!! Beauty all the way =D
B

Woohoo! Every NGD for a Monarchy gives me hope that mine will arrive soon. I played on at the store and I agree that it seemed better (if that's even possible) than the original
T

Thanks guys!
Here is an unboxing clip:

That is a killer guitar. What a great color. Wow. Congrats.
B

Damn J! That purple is so nice
O

Awesome man... Here's to many hours spent happily playing it!

God, I love everything about that guitar. The color, the black hardware.

The purple Monarchy is IMO the best Majesty they've ever made.

Razzle said:
The purple Monarchy is IMO the best Majesty they've ever made.

You've got to check out the purple sparkle Majesty at Dubaldo Music's website:

Sweet axe! Agree with everyone--purple is perfect for that guitar.
T

thejone said:
Finally it is here and it is just fantsatic! It is evan an improvement of the regular and also the Artisan series! Big thanks to EBMM for this great instrument which inspires my music. Thinking of an evening playing on this awsome instrument keeps me additionally motivated during day doing my job! Hope to be able to post new music with this instrument soon!

Awesome axe! Please elaborate as to how it's improved over the original. Thanks.
T

tonechaser1 said:
Awesome axe! Please elaborate as to how it's improved over the original. Thanks.
Click to expand...

1) When I took out the guitar of the case I realized that it is even lighter than the other majesty series. On a body scale, it weighs only 3.1kg while the IC 7 Majesty brought up 3.3kg. However, the body scale I used for that does not measure validly in that range. I guess the difference is bigger than 200g.
2) The next thing was that the guitar came out of the box almost in tune (except for the seventh string). Of course, this is no specific indicator but when I set up the guitar almost no adjustment to the truss rod was necessary. For now, I one the guitar for a few days and no readjustment was necessary either. From my experience that is remarkable for a Majesty Guitar. I also own an Artisan Majesty. For both the IC 7 and the Artisan recurrent adjustments of the truss rod were necessary during the first year or so. I would say that my Majesty guitars are now equally stable. However, initially there was a lot of retuning and maintenance necessary for the previous majesties.
3) After approximately 20h of use there is no sign of wearing off on the hardware. The knobs seem to be very resistant because they are just painted black with a glossy finish.
4) Easier string change because the locking tuners have been updated; they now feature a bigger hole for the strings.
5) It sounds a bit darker to my than the standard Majesty and a lot darker than the Artisan Series. For me the Artisan Series have the brightest tone. Furthermore, the PU' don't do this noise cancelling thing so strong any more. The illuminators have the tendency to supress quieter note and pronounce the louder ones when played simultaneously. You will hear that instantly if you hit hard a chord on the A-string. During that chord rings, you can try to get some tone out of the higher strings by picking them softly. You will be surprised how strong this suppression effect is on the illuminators. Still, I like this effect; it is just much less in the Monarchy Series.

Limitations of my observations:
1) Short observation time; wear off of the hardware might still happen.
2) No statistical relevance. Except for (4) all observations could be a result of production variety.
3) No eligible scale.

Out of all the Majesty configurations the Majestic Purple has got to be the best one. Great acquisition!
D

I must say your photos make the purple look far more appealing than the online retailers' photos. Nice job on the pics.

thejone said:
Thanks guys!
Here is an unboxing clip: