NMNGD: Not MY New Guitar Day

Ok, I have a fun little story for you.

Back in August, I think this was the last Friday of the month, EBMM had posted a page on their blog with all of the one-offs they'd made for the summer NAMM show. I was ogling the guitars when my son walked into my office and asked what I was up to.

He is guitar freak, also, having spent all of his money he'd earned cutting grass the last two summers to buy a really sweet limited edition American Std Tele two summers ago, and then a used American Std Strat last summer.

As I'm scrolling back up the page to show him all of the guitars, he spots the Morse Burst Blue Cutlass with the bound fretboard. Next thing I know I'm wiping his drool off my desk. A bit later, when I had a private moment with Mrs. Claus, I asked what she thought about trying to get it for him for Christmas and birthday (birthday is coming up soon). It was more money than we'd normally spend, but, he's a fantastic kid, and I decided to try to absolutely thrill my kid on Christmas.

So that Friday afternoon, I purchased the guitar from Sam Ash, and then nervously kept checking the page all weekend, as it still showed as being available for sale. Finally, on Monday, I received tracking info on the guitar, and then it was marked as unavailable, and I breathed a little easier.

On Wednesday afternoon, my son wandered back into my office and asked if "that one guitar" was still available? "Let's see," I said. So I pulled it up on SamAsh, and said, "Sorry, buddy, looks like someone bought it." What he didn't know was that it had been delivered that morning without him noticing.

So it was delivered on Aug. 30, and after he left for sports practice, I pulled it out and plugged it in just long enough to verify that all the electronics were in working order, took a few pictures of it, and then packed it back up and stashed it in its hiding spot. Then I spent almost four months knowing it was in my possession, resisting the urge to break it out when he was gone - serious torture, in other words!

(Side note: somebody asked on the forums not many days after it was delivered if someone here had picked that one up. While I thought it was unlikely he would run across my response had I answered, I decided to keep mum. He frequently talked about how he liked my EBMM guitars, but it would be a long time before he could afford to spend that much on a guitar, so it wasn't impossible that he could find his way here.)

So, my plan for Christmas involved a Starry Night Luke 3 that he and the rest of the family knew I was getting. I had been given a scheduled completion date of Dec. 9th for the Luke, so I was pretty confident that I would be able to have it under the tree Christmas morning. Since we would all know what was in that box (wink, wink), I would have him help me unwrap it, only to discover the Cutlass inside. And then my guitar would be in a closet somewhere waiting until he'd had that surprise.

That plan wasn't to be, however, as the Luke only arrived last Saturday. So, on Christmas morning, he watched as his sister opened gift after gift. Meanwhile he'd received a new bath towel (fun!), and a specialized die cutter that cuts guitar picks out of whatever stock you put in it. (Pretty cool gadget, but not something that had been on his list.) Finally, when the confused look on his face could no longer be ignored, I told him there was one more gift on the landing of the basement stairs, and he should go get it.

It was clearly a guitar case-shaped box, and he was now differently confused, wondering if this was my Luke. Unwrapping it, he saw MusicMan on the box. I helped him get the case out of the box, and then he noticed the "Cutlass" badge on the case. (How is it that the Luke 3 doesn't get its own badge for the cases??) So now he's thinking, "I'm getting a Cutlass?" The case was on the floor, and he was kneeling in front of it when he opened it, and he sat there just staring slack-jawed for almost a minute when he realized what guitar it was. He had the most dumbfounded look on his face when he picked it up and started to experience this beautiful guitar, wondering how we could have had it all this time without him knowing. (Santa never tells his secrets!)

So that was the highlight of my Christmas! It was such fun to watch him be utterly surprised, and delighted by what he received.

He still insists that the Tele is #1 - and I get it, it was his first guitar, and he paid for it himself - but he's pretty well decided to sell the Strat now. I think it's pretty likely that the next guitar he buys will be another EBMM, either Armada, Luke3, or Valentine.

I'm seriously jealous of his Cutlass! I'm a sucker for a blue guitar - yeah, he comes by it honestly - and it's among the prettiest blue guitars you'll ever see. The trem on it was set up just splendidly from the factory. The tension is just enough that it doesn't move when you're just spinning the bar around, but flutters oh so easily when you want to move it. The visible grain of the body is very pretty, and the birds-eye roasted maple neck is spectacular. The white fretboard binding looks really great with the white pick guard and pickup covers, too. Oh, and it sounds awesome, to boot!

I'm later posting this than I'd intended to be, but I didn't want to set up lights to photograph his guitar until I could also shoot my Starry Night, so I've been waiting for that L3 to arrive.

I had a few more good shots of the Cutlass, but I'll be a good citizen.

I hope you enjoyed this little Christmas tale! 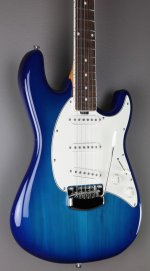 I was reading waiting to hear a problem! hahaahahah Great story...and that guitar is very special...I own the company but am still a fan of great guitars.

Big Poppa said:
I was reading waiting to hear a problem! hahaahahah Great story...and that guitar is very special...I own the company but am still a fan of great guitars.
Click to expand...

Good job, Santa - so great your son shares your guitar passion - and he'll remember this the rest of his life!

Nice cutlass. That must have been a limited run. I want an all rosewood neck tobacco burst with black pick guard cutlass.

kestrou said:
Good job, Santa - so great your son shares your guitar passion - and he'll remember this the rest of his life!

Thanks, Kevin. We have pretty much nightly guitar talk sessions, and I'm sure he will remember this past Christmas for a very long time.

Thanks - hopefully he thinks he's lucky.

CHill said:
Nice cutlass. That must have been a limited run.
Click to expand...

It was a one-off from summer NAMM.

I'd like to have been a fly on the wall when he opened the case just to see his reaction.

Congrats to you both

Beautiful story, thanks for sharing
I also loved this guitar when it appeared online. good to know that it´s in good hands
love blueburst (obviously) - looks superb on this axe and the neck is killer!

Such a cool story. Your little dude has taste! I bet he will be an addict to EBMM as he gets older haha.

Location
Somewhere between Paris and Buffalo

Stunning guitar and a great story!

As a cutlass owner I concur on the brilliance of this guitar - he will never need another strat. Great tale.

Great story and awesome guitar. The story and guitar will both last you all a lifetime!!!
S

Great story. Thanks for sharing

Thanks, Jeff. Now get back to posting NYNGDs!

jlbasscatcher said:
I'd like to have been a fly on the wall when he opened the case just to see his reaction.
Click to expand...