I opened up the pre-amp and the code ''MC053W'' is written on the pre-amp. When this code is googled, it says the pre-amp is for a MusicMan Sterling?

The pickup is also described as an Alnico pickup.

Can someone verify if both the pre-amp and pickup is a proper full on fat USA Stingray 5 spec. 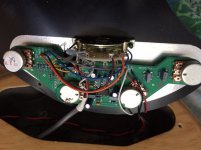 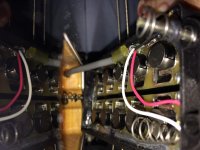 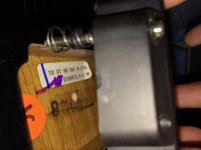 Alnico pickup is correct for that year. No idea about the pre-amp

That's definitely an alnico pickup. A ceramic pickup would have a bar magnet in the bottom. Neodymium pickups have a little magnet on the bottom of each pole piece, if I recall.

The preamps for the Stingray and Sterling are pretty much the same, except maybe for the capacitor values. I don't see why they would make a different PCB.

Best thing to do would be to ask customer service.

The date on the preamp is correct for the bass though. When did Sterling by Music Man start?

I opened up the pre-amp and the code ''MC053W'' is written on the pre-amp. When this code is googled, it says the pre-amp is for a MusicMan Sterling?

The pickup is also described as an Alnico pickup.

Can someone verify if both the pre-amp and pickup is a proper full on fat USA Stingray 5 spec.

"MC053W" is an Ernie Ball Sting Ray 5 preamp board. However, the same board was used for the "Sterling by Music Man" instruments (not Ernie Ball). That's probably why "Sterling" came up in your Google search. Ernie Ball preamps are dated with round stickers attached to the rear of one of the pots (like yours). An Ernie Ball Sterling Bass preamp board would be designated "MC054W" and has a slightly different shape to your board.

If you need to contact EB Customer Service their email is:

Cheers for the info guys.

I e-mailed [email protected], just waiting for a reply.

Anyone on the forums, up for opening there Stingray 5 to have a look at their pre-amp, if yes, is there any resemblance to my own pre-amp picture

Interestingly enough there are only 2 or 3 pictures of the Stingray 5 pre-amp on the entire internet, and its the old version form the 90's.


"Interestingly", but hardly remarkable or sooprizing
given that the internet has become primarily a place
to advertise merchandise, and EBMM electronics are
NOT marketplace fodder, in that EBMM will not retail
them and the only source for a very rare instance of
such items on ebay etc is to cannibalize a real EBMM
instrument, a sad event that, happily, seldom occurs.

Sooooo, the impetus to post pix of EBMM electronics
is almost nonexistent. OTOH, seems to me I've seen
more than a few such pix in this forum. Apparently
the posts lack the necessary key words for searches
by a search engine that is essentially designed as an
aid to shopping for merchandise.

Example: A person often mistaken for a certain TV
celebrity, a quite oddly distinctive looking celeb, was
used as our "model" for a Google Image Search. The
search result was hundreds of hits, all of them trying
to sell a "red and black hoody" cuz that was what our
model was wearing ! IOW, show google a person and
google will try to sell you his clothes.
Last edited: Jun 16, 2018

A guy in a red and black hoody is selling MM parts?

five7 said:
A guy in a red and black hoody
is selling MM parts?
Click to expand...

OK. I confess to being "our model" and to being
inseparable from my occasionally-laundered red
and black hoody. But ! I have never offered any
MM parts for sale ... unless it were a completely
assembled collection, a whole ready-to-play MM.

And yes, I am peculiar looking, and sometimes
mistaken for one of the wackos in that duck-call
billionaire family. But, I do not make duck calls,
and I expect to die working on my first billion $,
prolly cuz I only work on it for a coupla minutes
every third thursday in months not containing a
letter "r" in their name. Kuh-pische ?
Last edited: Jun 20, 2018
You must log in or register to reply here.
Share:
Facebook Twitter Reddit Pinterest Tumblr WhatsApp Email Share Link