I´m new to the Forum and a new happy owner of an MM Stingray PDN in Honey Roasted.
Got this instrument from a German Dealer, they had it sitting around for a while, so it´s completely new, not played at all, was sitting in the case, waiting for a lucky customer . Played a lot of different basses in the past, some custom ones and even some different Stingray, but that´s just an freaking awesome instrument!
I reallly love the sound, playability and of course the look, the pictures don´t compliment that awesome roasted neck!

BUT: The bad thing is I already asked about my serialnumber, but that serial is not registered!
So my question or Problem - is this an fault by MM or is this thing fake? I can´t believe that it´s fake, ´cause it looks 100% original (pictures are attatched, also the serial on the neckplate). I´m still a really young musician, but have been playing for a long time and wanted to invest the money into something that I really believed in and still do, it´s a limited run and something special (so maybe, the value will be increasing one day, I already know I won´t be selling it ) so it´s really strange that it´s not in the EBMM database
Yeah, honestly I´m a little bit disappointed, or worried about it, but maybe you can help me with that.

It plays awesome, sounds great and anything, but just for the records, in my opinion it should be registered, just because it´s a limited run!

Hope you can bring some light in the dark.
Thanks a lot guys and sorry for my bad english
Have a great one! 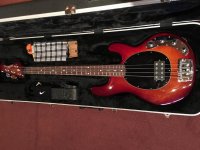 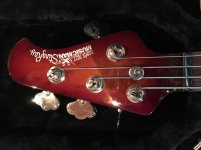 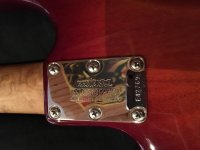 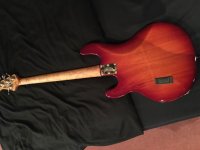 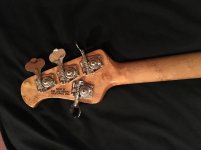 Compared it to several of my Music Man basses.
The serial shown in your picture looks like E42759.
A sloppy stamp can make the body of a five look closed, like a six.
But the sixes curved upper horn can't convert to a straight line like that of a five. 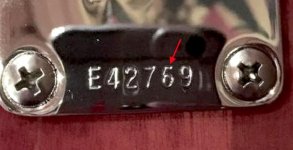 Hey guys, thanks for your input, I just took another picture and attatched it. Hopefully you can see it better there, in my opinion it looks like a 6, if you have the chance to zoom in, you may see it a bit better.

Id have said its a five personally, not very clear stamping though

With out getting technical i read that number as a 6

Have EBMM checked if the serial matches the bass with a 5?
S

@nurnay, thanks a lot, I think so too!
@Dead-Eye, yep they checked both and none of them is in their database,
so it doesn´t really matter if it´s a 5, or a 6 .
Just kidding, it´s strange anyway! But never the less it´s an awesome bass! 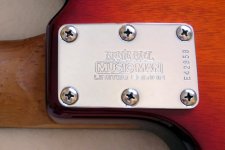 Anyway, looks, feels and plays like a Music Man. I can not imagine, that anybody would achieve this built quality at a cost that could justify faking. Especially when you can't mass produce.

Paco Maraca said:
Anyway, looks, feels and plays like a Music Man. I can not imagine, that anybody would achieve this built quality at a cost that could justify faking. Especially when you can't mass produce.
Click to expand...