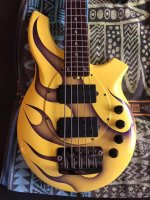 It’s quite a thing, innit?

Whoa. A one off from the factory?

No, a rescue of sorts. Found in the wild!

Damn, that's nice! So I guess all the Bongos with flames are yours now?

Surely I'm not the first to say this in all these years, but ... cowabongo!

Wow ! That’s different to say the least. What’s the history of it ?

danny-79 said:
Wow ! That’s different to say the least. What’s the history of it ?
Click to expand...

That Johnny guy at Hobo Depot bought it used and apparently it was kind of banged up. He decided to make it better and this was what happened. Then he sold it to a TBer who couldn't wrap his head around the fabulousness of the thing and he put it up for sale.

No-brainer once I saw it.

It needed some tender, loving care....the relief was dead flat and the pickups were much too high and it had some [email protected] rounds on it. If you were a slapper, this would have made you happy. That is not me.

So I yanked the strings, installed some Cobalt Flats, fixed the relief to be like a normal human would want it to be, adjusted pickup heights and now it sounds and plays like it should.

Doing a little research, it began its life in late 2007 as a Stealth model. I suspected as much due to the black hardware and blacked-out pole pieces.

Fair play and thanks for the info. Happy ending
M

I recognize that bongo from the same dude that tried to sell me his sabre bass.

Caught the NBD yesterday as I dropped in the forum just to check in, and thought, "wow-- pretty darn cool! For those delicately dispositioned folks out there who wince at the sight of a Bongo, this one should send them straight to the ER!"

Then, just moments ago I was scrolling though YouTube and that very bass was featured being played in my feed... Yep-- none other than Johnny Long:

Came back here to get the skinny, and sure nuff~

His thoughts on BMW building the bass are kind of goofy, but I like his enthusiasm.

bovinehost said:
His thoughts on BMW building the bass are kind of goofy, but I like his enthusiasm.
Click to expand...

Agreed. He brings that goofiness to a lot of his videos, but it always makes me smile. Kind of refreshing in the digital realm
S


"Much may be made of a black bass if he be caught young".

(Not quite Johnson, but you get the idea)

Thanks, babies. I might have to sell a bass or two to remain solvent.......
S